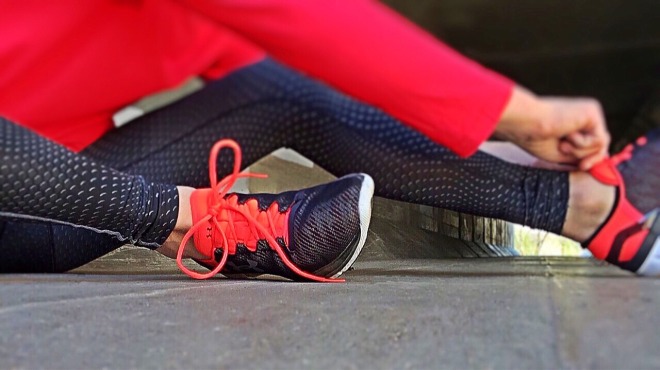 I go the gym once or twice a week. It’s okay, hold your applause, I tell you this only as a statement of fact. I go once or twice a week and I’m sloppy and lazy and the whole thing is really just an exercise in getting out of the house and shutting my brain off for an hour. I’m not in it for the gains.

So I’m in the gym this afternoon, and a man approaches me (my fault, obviously, for not only being a human woman but also forgetting my earphones, so I’ve no-one to blame but myself). And he begins with the classic opener, ‘I haven’t seen you in here before’, as if he’s the gym’s official census taker. ‘I switched to this gym recently,’ I say. ‘Back in November.’ Then there’s the tight-lipped smile and small-but-forceful nod of the head to indicate the conversation is over. It wasn’t over, of course (it’s never fucking over).

‘Oh right,’ he says, before furtively looking around and lowering his voice. ‘I thought you might have been one of them January gym-goers.’ I stare at him blankly, before giving him the nod again, coupled with an ‘ah’ and a sort of nasal exhale, and eventually he walks off to grunt theatrically in the weights area.

January gym-goers. The absolute worst kind of people, if social media and op-ed columnists are to be believed. Right up there with vegans and cyclists. Look at them, jumping on the health-kick bandwagon, handing over huge wads of their hard-earned cash and then exercising in an environment designed for exercising. God, just awful. Where do they get off deciding to make some healthy changes to their lives in this, the month of January, which is apparently sacrosanct to year-round gym-goers – the ones who’ve presumably earned the right to be in the gym… by being in the gym.

I have a huge amount of respect for fitness fans, and I say that with the greatest sincerity. I marvel at friends who hit the gym before work, getting up at a time which for me feels like the middle of the night. I’m amazed by people who post their 5k, 10k and half marathon times, and am baffled by their declarations of disappointment when they don’t clear a personal best. I mean, my god, you ran for more than 10 consecutive minutes. I’d want a parade for that. And to be fair, my gripe is not aimed at all gym-goers (#notallgymgoers), but if you do have a problem with people joining the gym in January: why?

Everyone has to start somewhere, right? With everything. You don’t look at newly-toddling babies and think ‘wow, look at that fucking casual’ – or maybe you do, maybe you’re actually that much of a monster. Presumably – and correct me if I’m wrong, for I’m clearly not in the inner circle here – you can only become a regular gym-goer by visiting a gym for the first time, so why can’t that be January, when people are freshly motivated, or at least sufficiently beaten down by the relentless #newyearnewme narrative that has everyone feeling like shit?

Because ragging on January gym-goers makes you feel good, is why. Because it’s just another kind of tribal superiority that our garbage world is addicted to. ‘Ugh, I couldn’t get on the treadmill for 10 whole minutes because of all the newbies,’ you lament to your equally exasperated pals before getting in your cars and driving 10 minutes home. ‘It’s just so crowded in here because of them.’ And the implication is that because you’re the best at doing the gym, you should continue being allowed to flex your doing-the-gym privilege, free of the proles who can only dream of doing the gym as good as you.

If you really can’t bear to share your gym space with the eager newbies, just sod off for a week or two. Run outside or something, in nature’s gymnasium. When you return most of them will have stopped going anyway, probably because they’ve been sighed and tutted into the ground by your kin. And the ones that do stick around? Perhaps they’ll be worthy potential members for your whingy complaint club next year. You dicks.